The RHA in partnership with the F.E. McWilliam Gallery and Studio, Banbridge presents a major exhibition of work by renowned artist Basil Blackshaw. Blackshaw at 80, curated by Riann Coulter was first shown F.E. McWilliam Gallery and Studio, Banbridge in May 2012 and is open to the public on the 11th of January 2013 in the RHA.

The exhibition, coincided with Blackshaw’s 80th birthday and features over 50 paintings chosen by the artist from throughout his career.

Born in Antrim in 1932, Blackshaw is recognised as one of Ireland’s greatest artists. From the age of 16, when his precocious talent led him to Belfast College of Art, Blackshaw has been lauded by the art world and his fellow painters.

Although his early paintings of horses and dogs gained him critical praise and a loyal following of collectors, Blackshaw has refused to stand still and has, on several occasions, changed his approach to painting. This refusal to stick to one signature style has infuriated some critics but has also made Blackshaw one of the most exciting Irish painters of the last fifty years.

‘Blackshaw at 80’ presents a diverse range of works from throughout the artist’s long career. Early works including ‘Anna on the Sofa’ are joined by portraits of great men such as Douglas Gageby, Brian Friel, Michael Longley, Ted Hickey and John Hewitt. Pictures of friends – Cherith McKinstry, Mary McGrath, David Hammond and Paddy Falloon – are testament to close personal relationships that have been captured in paint.

Blackshaw’s beloved horses are well represented in paintings as diverse as The Fall, The Walk of the Horse and Niall’s Pony. Other favourites that Blackshaw has chosen include Big Brown Dog, The Gawky Cockerel and Dolly.

A number of superb pictures including The First Tractor at Randalstown, A Dog and Two Men and Night Rider first seen in Blackshaw’s last major exhibition, curated by S.B. Kennedy for the Ulster Museum in 2002, have also been selected by the artist.

Several more recent works, first exhibited in Cork at the Fenton Gallery in 2008, are also included. Zebra, Bird Cage and Pram are remarkably vital images, scratched out on surfaces that resemble parchment or plaster rather than canvas.

As his friends and admirers confirm one of the attractions of Blackshaw’s paintings is that they are often deeply rooted in Northern Ireland but are also refreshingly free of conflict or sectarian violence.

Perhaps that is why he has not received the international acknowledgement that many feel he deserves. For the majority of the time that Blackshaw has been working the world view of Northern Ireland was one-dimensional.

Blackshaw’s multi-layered work did not fit neatly into this frame. If he had left to make his name in London or New York he may have been recognised as the great painter that his admirers believe him to be. But, if he had left, he would not be the Blackshaw that we know and could not have painted these images deeply rooted in the landscape and lore of this small corner of the world. 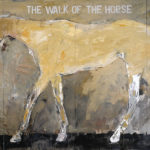