Curated by Caroline Hancock, these artists create their individual installations to deal with the fragility of history and identity. Working in the context of contemporary Algeria each identifies a specific loss or disappearance of material culture that will impoverish the formulating and understanding of societal growth.

Zineb Sedira was born in France of Algerian parents. Her videos and photographs often inspired by her family stories are made in Algeria and exhibited worldwide to great acclaim.

Amina Menia is based in Algers. She has an incisive fascination for art and life in the public sphere and the possibilities or incongruities of the urban environment.

Both artists, who work in very distinctive ways, concentrate on collecting traces and testimonies that are both poetic and socio-political. 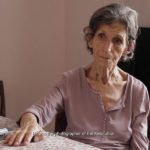