Mark Garry’s 2015 exhibition A New Quiet was the third time the RHA had collaborated with the artist, the first being his inclusion in the 2003 iteration of Futures and the second Plane, a 2006 exhibition that he curated as part of the Artist Curates series of the mid 2000s, which included work and collaborations by A=apple, Karl Burke, Robert Carr, Paul McKinley, Christophe Neumann, Jenifer Phelan, Martha Quinn, Robin Watkins + Nina Canell.

A New Quiet held in the main space, used a variety of media and mechanisms, including but not limited to thread, print, watercolour, parian porcelain, an improvised cello, gypsophila (baby’s breath), poured pigment with a walnut frame, all under a meticulously and laboriously constructed installation that was anchored on three ceiling points, which swept overhead, intersecting the space and uniting the various elements that lay underneath, this thread piece titled quite aptly Being Here Again.  An aside, the MAC in Belfast has a permanent installation of Mark’s that threads through their atrium space which alone is worth a trip.

Two artworks that stood out when I thought about this exhibition; Berlin, an inverted dried rose that hung precariously from a single nail and Space, a single horse hair framed in walnut, almost imperceptible to the human eye, invisible to the camera.  The simplicity and the skill in their execution summed up the practice at this time, poetic and confident yet intelligent and profound, and still, so still.

The RHA are pleased to be hosting a new quiet by Dublin based artist, Mark Garry. This is the fifth major solo exhibition Garry has undertaken over the past twelve months. Mark creates beautifully considered ephemeral works that act as embodiment’s of slow time. His works are measured and quiet, often requiring meticulous systems of construction. They combine physical, visual, sensory and empathetic analogues, creating arrangements of elements that intersect space and form relationships between a given room and each others.

Garry’s work stems from a fundamental interest in observing how humans navigate the world and the subjectivity inherent in these navigations.This exhibition of new works incorporates a diverse range of related materials that combine to form carefully structured poetic narratives between images, material and objects. It quietly notes the manner in which actual and historical cultural elements resonate in this particular moment and the types of shadows we as humans cast. 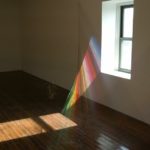 A full colour catalogue will accompany this exhibition and will be available to purchase at the front desk and from the RHA shop online: www.rhagallery.ie/shop/