Painter Eóin O’Connor merges the representational and the abstract in a series of brightly coloured, sparse and loosely painted works at the Ashford gallery, opening on March 2, 2006. Alluding to the intangible and invisible elements in the modern environment of communication and transmission, his works bring together architectural forms and scientific phenomena in the manipulated spaces of a pictorial medium

The geometric frameworks, patterns and loose organic shapes which comprise the subject of this exhibition, draws from the influence of technology, scientific study and analysis, in a playful yet subverted manner. Quite like a schematic diagram or instructional drawing, O’Connor believes painting to be an instrument which has the ability to display the non-physical, a tool to reveal forms and processes and a means to edit the structure of the natural environment. 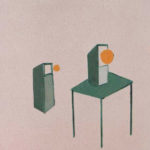 The Sun Through A Telescope Mixed Media on Canvas 30cm x 35 cm.

Eóin O’Connor graduated from the National College of Art and Design in Fine Art Painting with first class honours in 2003. He was awarded the CAP Foundation award in the same year and was made artist in residence for Wesley College Dublin in 2004. He has had numerous group exhibitions including Fresh Paint at Hillsboro Fine Art, Dublin, The IAWI Summer Show, Arthouse, Temple Bar, CAP Studios Exhibition and The RDS Travelling Exhibition.