The Ashford gallery is pleased to present its second exhibition of 2006, Claire Carpenter’s The Sudden Randomness of the Present, a new series of pictures dating from early 2003 to the end of 2005. Claire Carpenter makes figurative, apparently narrative works which seem to obliquely refer to events and emotions which impinge upon her life. The pictures, all in tempera on gessoed panel, are small or medium in size and are brightly coloured. The exhibition works as a series of very private ‘pictures’ as opposed to ‘paintings’ with a hidden, ambiguous narrative.

This hidden narrative together with the deft and committed handling of materials makes for an uneasy balance and tension in her work. It is as if she is telling you something but not quite. Works such as Don’t Look Now, featuring a naked child embracing a blue rabbit are, at first glance cute, appealing images. However there is a darker side to the apparent softness of this picture, named after the unsettling 1970’s film set in Venice. The title work of the exhibition is a medium size triptych featuring a heron bird rising from the central panel, either side elemental seascapes appear in yellows and browns. The work suggests a strange juxtaposition of feelings – that of drowning and being saved at the same time.

Background shifting on red, tempera on board, 25.5 x 20cms 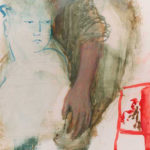 Carpenter studied printmaking in NCAD, Dublin, completing a Masters in Chelsea School of Art, London and this is reflected in her work– she enjoys the process of laying gesso primer on board and making the surface of each picture. Many of the works have minute details which have been painted under a magnifying glass that require the viewer to look closely and carefully at each one.

Carpenter cites the work of Goya, as well as the emotion in the frescoes by artists such as Giotto, as strong influences in her work, and also the work of various fiction writers.

Carpenter has shown for the last 2 years in the RHA Annual Exhibition and was an invited artist in 2004. She is preparing for a group exhibition named AIRMAIL, organised by painter Richard Gorman RHA, at the Yanagisawa Gallery in Tokyo from 5th – 25th June 2006 which includes the artists Nathalie du Pasquier, Chung Eun Mo, Patrick M Fitzgerald, Ronnie Hughes and Willie McKeown.