Artist Stephen McKenna will exhibit a selection of 60 paintings, 27 watercolours and 19 drawings at the 2005 Nissan Art Project from September 15 until October 30 at the Royal Hibernian Academy in Ely Place, Dublin.

While not a full blown retrospective this exhibition offers the most comprehensive opportunity to acquaint oneself with the breath and rigour of Stephen McKenna’s artwork.

McKenna, based in Bagnelstown Co. Carlow, has since the late sixties lived a peripatetic life finding studios throughout Europe to pursue his interest in the complexities of painting. McKenna is fascinated how space and light define objects and subjects, and how the intrinsic qualities of oil paint and the formal history of representation combine to create the visual fugue of a painting. McKenna paintings are highly rational, well organized arguments about possibility. His work insists on a knowledge of art and of a mastery of technique. Sixty paintings will explore his investigations through thematic groupings such as ‘houses and windows, temples and places, figures and myths, trees and rivers, the dead and the living, the sea and the sky and the genre of still-life’. Though the emphasis on the exhibition will be from the eighties onwards this will be contextualized by work from the late sixties and seventies.

An additional section of the exhibition will feature his watercolours and there will be an entire gallery devoted to his rarely viewed drawings.

Commenting on the exhibition, Gerard O’Toole, Executive Chairman, Nissan Ireland said; “The Nissan Art Project has carved itself a reputation for bringing outstanding exhibitions to the general public and this year’s is no exception. Nissan is proud to be sponsoring the art project for the fourth consecutive year and in doing so recognise the great contribution made by Irish artists like McKenna. We hope the public take the opportunity to visit the exhibition and enjoy the work of one of our finest artists.”

Patrick T. Murphy, Director of the Academy added; “Nissan Ireland has enabled us to bring the best of resources to each of these exhibitions and in doing so has raised our expectations of what we can achieve for Irish artists.”

To coincide with the exhibition the Academy is publishing a major book on the artist. Written by the distinguished Spanish scholar and critic Angel González García, Professor of Contemporary Art History, University of Madrid, the book will run to 190 pages with
over 70 pages of plates.

The Royal Hibernian Academy acknowledges the generous support of the Nissan Art Project and the promotional association of the Irish Times.

About the Nissan Art Project
The Nissan Art Project is a sponsorship of the arts, which is temporary in nature and courageous in its delivery. It aims at supporting working artists to create presentations which are site specific and exhibition based.

The project was first realised in 1997 with For Dublin by Frances Hegarty and Andrew Stones, which presented neon texts from Molly Bloom’s Ulysses monologue in nine city centre locations. Irish Sculptor Dorothy Cross’s Ghost Ship was the 1998-winning project. This consisted of the creation of a ‘ghost ship’ from a decommissioned lightship, which was anchored in Scotsmans Bay in Dun Laoghaire, Co. Dublin. The winning millennium project, Dan Shipsides’ Bamboo Scaffolding involved an intervention in the urban landscape through the use of bamboo cane scaffolding – as used in various Asian countries – around the Carlton Cinema building in O’Connell Street, Dublin.

Following this, the Nissan Art Project moved indoors to a gallery setting with a series of exhibitions at the RHA focusing on the skill of painting, presenting the work of major Irish painters: John Noel Smith, Barrie Cooke, Martin Gale and Stephen McKenna. 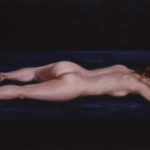