Over the past five years Liam O’Callaghan, who has featured in eurojet futures 01 and eurojet futures 05, has had a varied practice. From The Good Room, 1996, a photographic commentary on the elevated status of the sitting room of the three bedroom semi, to I’m a Success, 2000 where a range of individuals were supplied with cameras and asked to shoot three scenes of their idea of what had been successful in their lives. This looking beneath or beyond the social into the personally important is a core strain of O’Callaghan’s approach. He wants to simultaneously expose the methods or mechanics of a situation while supporting its ability to have meaning and magic beyond its constituent parts.

Between us and the quiet of time, 2005, was the culmination of a series of work first seen under the title These are not precious things, 2001, where he literally puts the ordinary detritus of life under the microscope. Nail filings, fishing gut, spider web and lead shot among many other materials are combined by pressing them between the glass of a slide. Sometimes projected through rescued obsolete slide projectors, sometimes shown under the magnifying eyepiece, these prosaic constituents rise beyond themselves to point to a biological grandeur – a secret sequence of pattern that binds all of creation, a kind of home made fractal theory.

For this exhibition the issues of method and magic or the mechanism of metaphor form the central topic. Time finds you a good place to fall, 2005, we encounter as a wall of wires,transformers and socket boards. The intestinal display is countered when one walks to the far side where opaque paper conceals the tiny white Christmas lights powered by the wire. This diffused light is playful and seductive, warm in its evocation of childhood wonder. It also conjures up a kind of amoebic revelation. Moments of joy, precarious balance, the transcendence of function, and multi-meanings of objects are crafted and emitted from ordinary elements by O’Callaghan’s perceptive power. 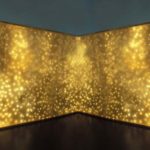 Liam O’Callaghan was born in Dun Laoghaire, Dublin in 1968. He studied graphic design in DILADT and had his first solo show in 1996 The Good Room which toured to the City Arts Centre, Dublin and the Belltable , Limerick. O’Callaghan’s exhibition I’m a Success was widely exhibited – first in the Gallery of Photography, Dublin then the Errigal Arts Festival, Donegal and later Belgium. In 2001 O’Callaghan collaborated with artist Ana Rackard to produce the book, Fish Stone Water Holy Wells of Ireland in which his photographs were featured. In 2005 the artist had a residency at IMMA where he exhibited his work in the Process Room.